Billy has recorded with the Medallions since 1957.  His Falsetto voice was one of the highest registered notes recorded in the song, “Behind the Door,” an original by The Medallions.  Billy is the manager of The Original Medallions.  In 1948, as a child, Billy sang in the motion picture musical “Carmen Jones.”  He attended Idyllwild School of Music & Arts in Los Angeles, California.  Additionally, Foster Productions, his company has produced shows with such artists as “The Drifters, The Coasters, Johnny Lee Hooker, Etta James, Mary Wells, and comedian/talk show host, Rosie O’Donnell.”  He was the co-author of “I’d Rather Go Blind,” recorded by Etta James. 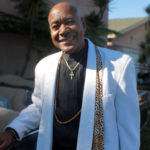 Actor/Bass Singer, Buddha Carter, joined the group in 1956.  Previously he sang with The Shantones, staying only a short stint.  Buddha left The Medallions for a few years to pursue a career in pro-wrestling, where he captured the Championship Belt in 1983 Buddha also became the manager of the New York Bombers Roller Derby skating team and secured acting roles in “Stir Crazy” and Mexican movies, where he played the “bad” guy.  Buddha also performed with the Jack’s Cadets.  Buddha passed away recently.  He is sorely missed.

Leon sang with The Fascinations in 1965. Leon also has performed with Little Joe Turner and The Hustlers, Leon Buddha and Billy Foster.  Leon and Billy have been friends and performed with one another since 1961.  Leon presently sings 2nd tenor, baritone and Lead on The Medallions song “The Letter,” and “Buick ’59.”  Leon recently lost his battle to cancer.

We belong to the West Coast Doo-Wop Historical Group.